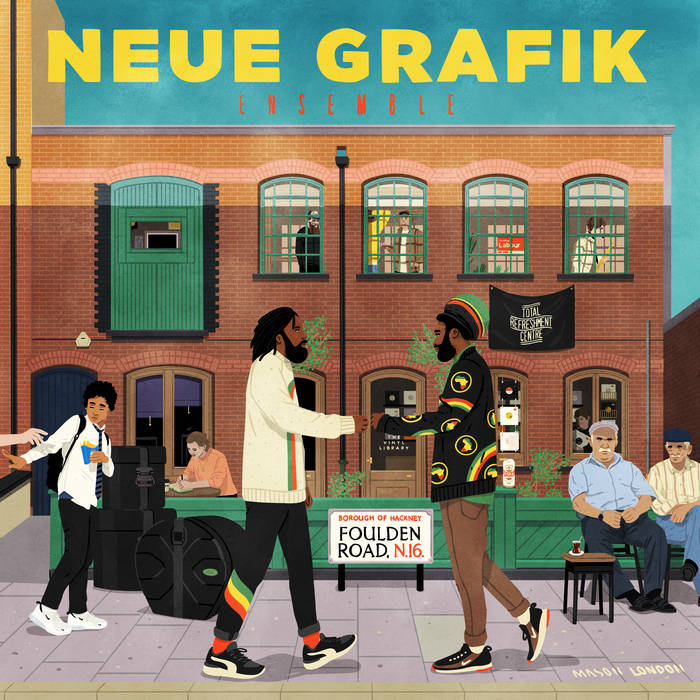 mafalda from the sun

Producer, instrumentalist and DJ, Neue Grafik, has been building a strong rep for himself over the past few years, releasing records previously on labels such as Rhythm Section, 22a, CoOp Presents and Wolf Music. His sound is a hybrid of jazz, house and hip hop, all with his unique geographical flavours of African ethnicity, Parisian roots and a love for London sounds like broken beat & grime thrown into the mix.

In his own words "this mini album has been conceived as a journey from Deptford to Dalston, right through Peckham. During a personal period of transition, I put this music forward at a crossroad of all my influences, taking the time to share and experiment with a band - more than that, an ensemble.

The idea is to incorporate musicians with their own sensibilities, collaborating together as a reflection of our society; unreal & rebellious, but with magic moments, and full of hope. The best representation of that is Total Refreshment Centre. This building and its community were a perpetual source of inspiration for me over the past two years & gladly allowed the creation of this project".

Having been first properly introduced to the community of the TRC during an after-hours jam, it came to TRC founder Lex Blondel's attention that Neue Grafik had some exquisite compositions of his own. A few weeks later, it was decided that Neue Grafik would form a band and that they would do their first gig at TRC, a week after the first day of rehearsals. No pressure…

Lex continued; "we paired him up with Emma-Jean Thackray, to arrange his compositions for a quartet, added Vels Trio's Dougal Taylor on drums, Matt Gedrych from MaddAddam on bass and Jordan Saintard on sax. Then the band got to work…"

Title track 'Foulden Road' commences the session in truly energetic fashion, named after the street in North London where TRC is based, and where these sessions were largely laid down. Keeping with the geographical vibe, next we have 'Dalston Junction', a two-part affair starting on a sci-fi boom-bap tip, before switching to the ethereal flute playing of Brussels musician Esinam, and the first outing on the collection for Brother Portrait. 'Voodoo Rain' is next, a sweet slice of afro-funk, featuring the incredible talents of London's own Nubya Garcia on sax, and the tempo picks up once again for 'Something Is Missing' - this live version comes from the afore-mentioned infamous first gig at TRC.

The goosebump-enducing vocals of Melbourne soulstress, Allysha Joy, set off the second half of the record with the beautiful downtempo track 'Hotel Laplace', recorded at a live session at Giant Steps, before kicking the energy levels back up with 'Hedgehog's Dilemma', once again featuring the vocals of Brother Portrait, as does the closing track, 'Dedicated to Marie Paule', a mid-tempo piece akin to 90's golden era jazz-hop, bringing the set to its conclusion.

This collection of tracks reflect the many moods and various genres indicative of Neue's creative approach illustrated above.

Seven songs strong, switching between live performances and studio sessions, this is all killer, no filler.

Bandcamp Daily  your guide to the world of Bandcamp

Guests include Kassa Overall and Muriel Grossman, plus an LP of the week by Van Hunt.