← more from
Total Refreshment Records
Get fresh music recommendations delivered to your inbox every Friday.
We've updated our Terms of Use. You can review the changes here. 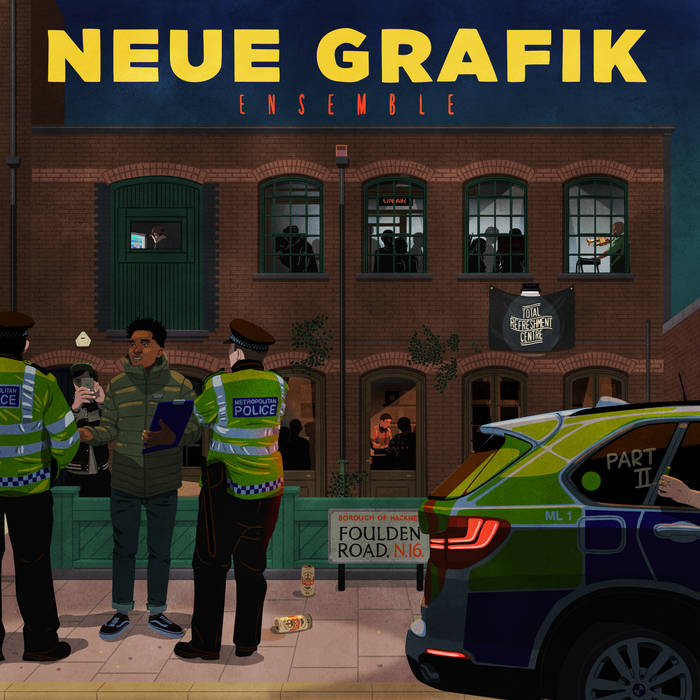 Dave Marsden Hey mate, I've just got home after your gig at the Jamjar in Bristol and just want to say
WOW!
What a great gig, thanks so much for a groovy evening
Big big luuuurve to you and the band and maybe I'll get to see you again at We Out Here in August
Take care, be good to yourselves and keep on grooving

South London based producer and multi-instrumentalist Neue Grafik announces his new EP 'Foulden Road Part II' from his Neue Grafik Ensemble band, released 25th March on Total Refreshment Centre. The sequel to their impressive 2019 release 'Foulden Road', Neue Grafik continues to incorporate 100% live takes with the ensemble, as well as solo productions that reflect Neue Grafik's past work with both the Rhythm Section and 22a labels.

Neue Grafik explains, "This EP is a reflection of the social context which surrounds me" – created in a year of much social isolation as well as political unrest, 'Foulden Road II' explores the complex feelings that he found himself battling. He adds "In 2019, we released 'Foulden Road Part I', which was a transitional album, exploring a new culture and navigating between two worlds: Paris and London. 'Part II' is a bit darker, closer to realness with a sprinkle of hope. I couldn't have predicted that I'd finish it encased in my flat, between four walls, in December 2020 after a year of lockdown, Brexit, George Floyd protests, and without London's brilliant culture mesmerising my mind. Everything was sad and closed. Hills were difficult to climb. But it also gave me the time to work hard and deliver this second part of Foulden Road, pushing it forward".

Combining an array of influences — from London, to Paris via New York, Nigeria and Cameroon — with well-measured confidence, ' Foulden Road II' allows you to reflect on the complexities of the last year, whilst braced with energy and hope to move forward positively. Heavy horns and hypnotic poetry form the backbone record, which will ignite any room. 'Foulden Road II' begins with the grounding poetry of MA.MOYO on 'Black Bodies'. The EP is dedicated to Adama Traoré, a black man who died in police custody in Paris. Neue Grafik explains "His name is not well known outside of France. I was shocked, devastated even, to learn that his story didn't cross the Channel". 'Queen Assa' is a heavily percussive dancefloor-hitter which honours French activist Assa Traoré, (Adama's sister) her family, and her struggle to support all families hurt by police brutality. Broken beat elements flow through the horn accompanied 'Officer, Let Me Go To School', while West London rapper Lord Apex offers an unapologetic and poignantly personal perspective on 'Step To It'.

Released on the Total Refreshment Centre label, based out of Stoke Newington's Foulden Road, the EP is a testament to his versatility as an ever-shifting figurehead. Engineered by Capitol K, recorded at Total Refreshment Centre, mixed by Marcus Linon at Greasy Records and mastered by Guy Davie at Electric Mastering – a significant pillar in Neue Grafik's musical career. Having played a DJ set there in 2017, he was convinced by TRC founder Lex Blondin to start a band after he was heard playing some compositions on the communal piano. After spending a couple of sleepless nights on the living room couch, his first gig was booked in the venue space downstairs a week later. The ensemble was established and he has remained in London ever since.

Neue Grafik hosts The Orii Jam Sessions, an energising weekly jam night at Hackney Wick's Colour Factory, which has become a pivotal weekly gathering, inspired by the likes of Unit 31 and Steam Down.

Composer, producer and multi-instrumentalist, Neue Grafik has been building a strong rep for himself over the past few years, releasing records on labels such as Rhythm Section and 22a. His sound is a hybrid of jazz, house and hip hop, all with his unique geographical flavors of African ethnicity, Parisian roots and a love for London sounds like broken beat & grime thrown into the mix. ... more

Bandcamp Daily  your guide to the world of Bandcamp